Leaving home at 10.30 in the morning - and now 19 hours later I'm sitting in a hotelroom in New York City - 37th floor with a fabulous view of the Hudson River.

As its dark now - I'm not really sure what I really can see, but.... Lights, lights and tiny little cars down there for sure.

But what happened today?

The airplane took off as planned at 13.00, but we were informed that we had to land to refill fuel in Bangor (Maine), due to alot of wind.

Movie onboard: The Proposal (Sandra Bullock/Ryan Reynolds) and yes it was just as stupid as one would expect.. Food, drinks, taxfree shopping served every other second.. But it was a really bumpy ride, so I really didn't appreciate that too much...

US Airlines-stewardesses were sweet, polite and very professional.

Landed in Philadelphia about one hour later than planned. The imigration-guy and customs-guy was just the most friendly. Meeting Ruth Anne, Tyler and Jim was also a great experience. Luckily they got me safely to the trainstation.

Amtrack really works well.. 1 hour and 20 minutes from Philly to the Big Apple..

With a quite big handbag and the suitcase I really hoped the hotel was nearby Penn Station, NYC. It realle yas - it was easily spotted, and I think it the 3rd closest building to the station entrance/exit. And with just a quick look around - Empire State Building was standing there bathing in light, and just looking spectacular. 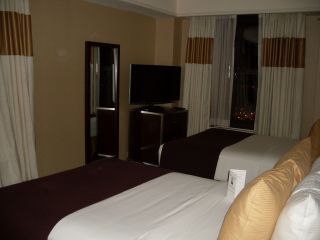