Starting up after a good night sleep. The very FIRST that happend was that my glasses fell appart. Yeah, great! So one project for the day is finding superglue..

Well, well - they've lasted for many many years now, so maybe it's time to get new ones anyway. 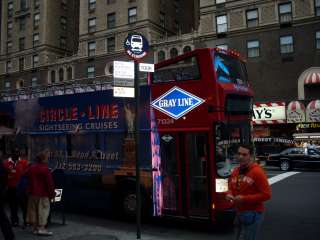 The weather was perfect for a doubledecker bus without a roof. Hop-on hop-off downtown tour with Grey Line busses - perfect for a day with sightseeing.

Took the bus from Macy's (not far from the hotel), passing Empire State Building, Flatiron Building, Soho, Greenwich Village - and then i went off the bus for a closer look at  Trinity Church, acctually seeing The Statue of Liberty (far out there out in the water), Wall Street, The Srock Exchange and Smithsonian Institutes exhibition of Native Americans. 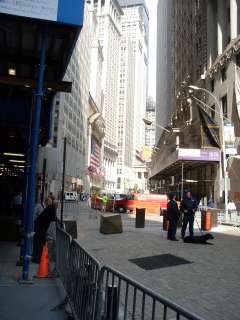 Extra interresting was seeing all the police, securityguys and a the Canine-unit with a dog trained to find bombs (probably) checking EVERY single car that was driving past Wall Street. (se picture)

Back on the bus, going past Little Italy, through Chinatown seeing Brooklyn and Queens from the other side of the East River. A quick look at the Manhattan and Brooklyn bridge, East Village, UN Rockefeller Center, Cntral Park and ending up at Times Square. Going over to Broadway, checking out the giant signs, posters, ads, etc.

The plan was to walk down to the Hotel - but after an hour walk around there, I chickened out and took the same bus from there to Macy's. Just a minute walk from the hotel..

I came back to the hotel at around 16 - and extremely tired and fed up. Great just staying in for a few hours, watching TV, and relaxing tired feet.. No big plans for the evening anyway - just going out for a little walk (to buy a little more diet coke, of course).

And the splendid, warm and sunny weather I had earlier today was now blown away, and it started raining quite alot.

Back "home" at the hotel around 23.00 - and could finally get ready for bed - and just enjoy the TV from the bed. Listening to the sirenes of police, ambulance and/or firedept. One can acctually hear them ALL the time...

Impressions so far? Big, loud, smelly - too many people everywhere, and many tourists. But the people are really friendly though. That never stops to surprise me here.

Well some poor guy was in the middle of the christmas-decorations, but wow - he had really done well untill now... I'm sure there were 20 fully (and I meen FULLY) decorated trees. And then all the racks with ornaments, cards, wrapping paper, etc, etc.